Digital storytelling as a tool for empowerment. This is the goal of the Belgian non-profit organisation Comundos. The organisation provides media literacy courses for young people worldwide. ‘By letting people from the Global South make their own story, you relinquish control.’

We have never been so dependent on the internet for communication and zoom sessions, learning platforms, and e-commerce. The pandemic accelerated this digital transformation. Simultaneously, it painfully exposed the digital divide: almost half of the world population does not have access to the worldwide web. Especially in the Global South, there is work to be done. Sub-Saharan Africa is lagging far behind. According to recent figures from UNESCO, which surveyed the situations of school-age children in the context of the pandemic, 89% of the students do not have a computer at home and 82% do not have access to the internet. Also, 56 million students live in regions that are not connected to a mobile network. Even though, the availability of mobile internet was expanded in Africa in recent years, – according to the World Bank, 70% of the region is equipped with internet facilities – remote regions still remain digitally cut off. In the areas with internet, the threshold to actually connect is often still too high and only 25% of the inhabitants use the internet.

Rural areas and poor families have the biggest disadvantage due to a lack of computers, smartphones, electricity, or because of language barriers. Yet, this has far-reaching consequences: those who are not digitally connected do not have access to knowledge and information, and are excluded from participation and communication. 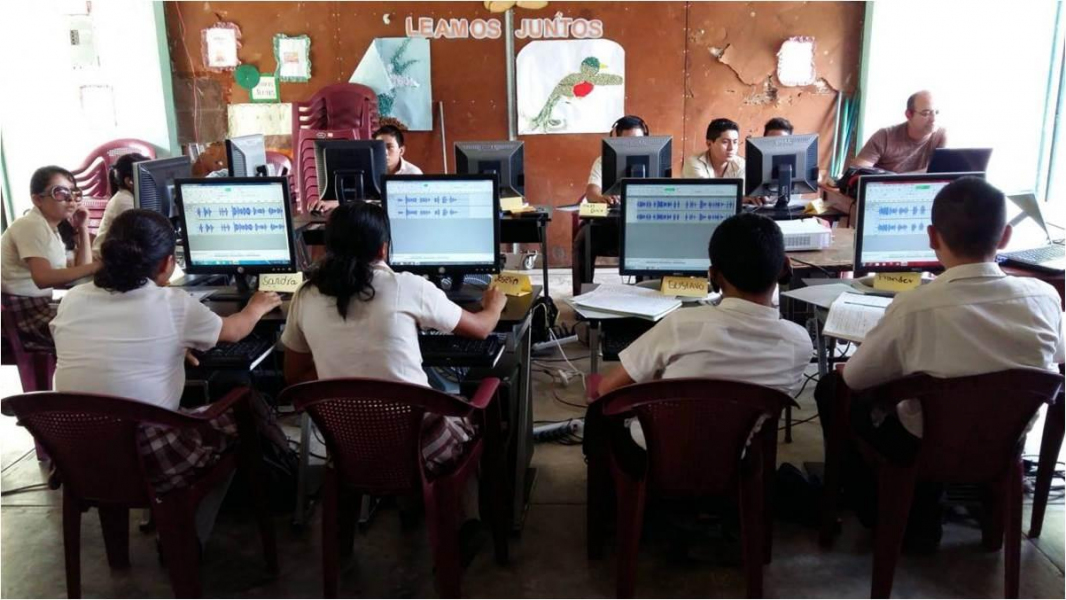 Create your own story

The non-profit organisation Comundos wants to change the current state of affairs. In 2014, they started teaching courses on media literacy to young people in the Global South. The driving force behind the initiative is Bart Vetsuypens. For a long time, he lived in Brazil, where he worked with participatory education centres for telecommunication in Recife and Fortaleza.

From that experience, he developed his own model to help young people bridge the digital gap and encourage them to make their own stories. ‘We do not only teach young people technical skills, but also how to look at media critically, how it is made and how it influences our view of reality.’ Through NGOs such as Disop (which doesn’t exist anymore, ed.) and VIA Don Bosco, Vetsuypens met with rural farming schools in Africa and Latin America. The courses of Comundos were designed for media coaches who want to learn basic ICT skills, as well as work with storytelling. In addition, with the help of language and images, young people learn to create stories inspired by the reality they live in, the problems surrounding them, their future, and how to put this into a three-minute video.

In the last couple of years, Comundos has been working with people in Mozambique, Cameroon, Benin, Congo, Rwanda, Honduras, Guatemala, Nicaragua, and Brazil. In 2015, Mo attended one of the classes in the Brazilian provinces Piaui and Maranhao. The youth shared their view on sustainable agriculture. They also expressed their worries about the growing insecurity in Brazilian cities, and the endangered babassu trees, among other things.

In Guatemala, local communities also started storytelling. In the following clip (also in this text) Levi Estuardo de Léon speaks about his survival strategy. His parents immigrated to the United States of America; he has not seen them for ten years. Together with his siblings, they set up projects to provide for themselves.
https://www.comundos.org/en/content/school-we-learn-be-auto-sustainable-sustain-our-families?language=fr

According to the Cameroonian Emmanuel Sengafor, being digitally connected is of great importance for remote areas. He is a pedagogical coordinator at Proceffa, a network consisting of some thirty rural farming schools in Cameroon. Sengafor once attended a course of Comundos. Now, he teaches to young people aged between 12 and 20 about media literacy on a platform on which ten of the thirty schools are affiliated.

Sengafor explains that, according to the message, the United Nations was going to send the Blue Helmets to guard the new status. ‘Photos showed the Blue Helmets arriving. Many people believed the message and went to the appointed location. Only: the photos concerned another operation. People ended up in violent riots, which even resulted in deaths. Nobody had the chance or thought to check if the call to action was real.’

Sengafor gives another example: ‘Having the internet is a major change for farmers living in remote areas. Access to information means empowerment. It does make a difference for the farmer’s pricing and work schedule when they can be informed and consult the prices and the weather forecast.’

The collaboration between Comundos and Proceffa started from scratch. With the help of Close the Gap, an initiative that provides used computers and laptops for the purpose of digital inclusion, Comundos provided in total 100 laptops: 10 laptops per school.

During our WhatsApp conversation with Sengafor in Cameroon, the connexion was regularly faltering. ‘Another problem is the quality of the internet’, Sengafor explains. ‘This shows where we stand in the digital reality, even in the capital.’

Of all the affiliated schools, about 40% participate actively to the courses. All of this is due to the connection capabilities of Cameroon; some communities even still lack any phone coverage. In English-speaking regions, there is a school in which the power supply is sometimes interrupted for six months. Sengafor dreams of equipping school with solar panels, so that they can have permanent access to energy. However, the financial means to achieve this are still lacking. 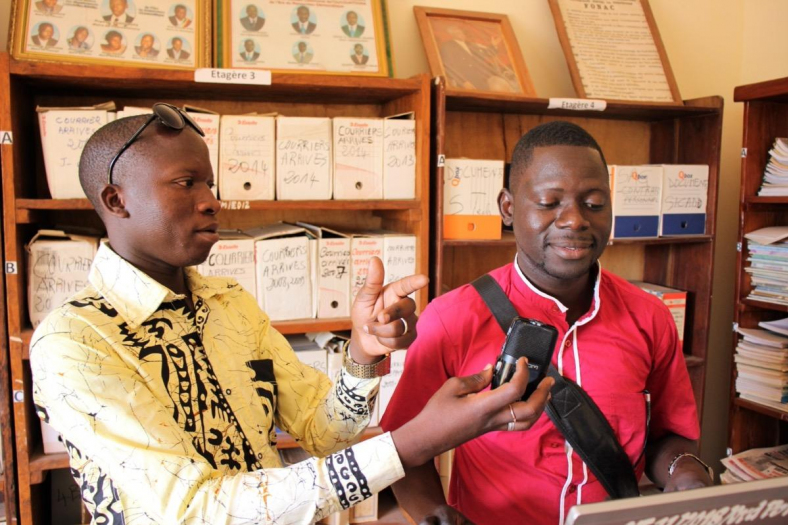 Language and communication are almost as important as ICT skills. It is about learning to tell your own story in words and pictures, and developing a vision.

Sengafor explains that ‘young people find this much more interesting than the boring lessons in the classroom.’ They look for photos that fit the story they want to tell, play with sentences, and learn how to express themselves. They do not only think about their own reality, but also about global themes like migration and climate change.

As soon as they have a first draft of their story, they talk to each other and learn how to be critical towards subject from their living environment. Afterwards, they start assembling that story; they learn how to upload images on a computer, narrate a story and insert background music.

Sengafor: ‘A great advantage is that the preparatory work can be continued when the internet is down; and once the internet is connected again, the movies can be posted online.’ 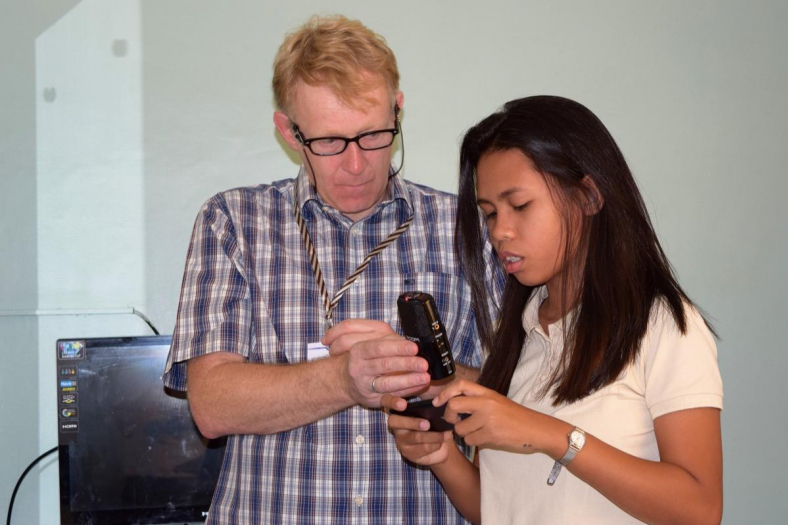 A slice of life

The social content of the courses is in line with the Sustainable Development Goals (SDGs). The youth of the Global South tell stories about education, health care, poverty, and housing – each time in very specific contexts.

Sengafor: ‘The SDGs are abstract concepts that were established through a global debate, which mainly took place online. Our voice was not heard. We want to prepare our youth for such debates so they can be heard too.’

Sengafor: ‘Storytelling helps to actively look for information and form an opinion. By telling each other the stories, debating the issues, and looking for solutions, we want our youth to develop an open mind and become more tolerant towards the other.’

The problems the communities face are not insignificant: in the northwest of Cameroon, there is the threat of Boko Haram. There, the lives of people revolve around meeting basic humanitarian needs. In addition, child marriage and female genital mutilation (FGM) are also taboo problems that Sengafor believes should be discussed. Digital storytelling can shed light on this topic.

Lastly, Sengafor points out how digital connection contributes to peace: ‘Cameroon is a country of great diversity. One part is Sahel landscape, another is savannah, and another part is forest. Our country counts more than 250 communities with just as many local languages. This diversity makes being able to communicate through all possible means even more important. Communication is a way to learn to understand each other. It supports the road to peace.’ 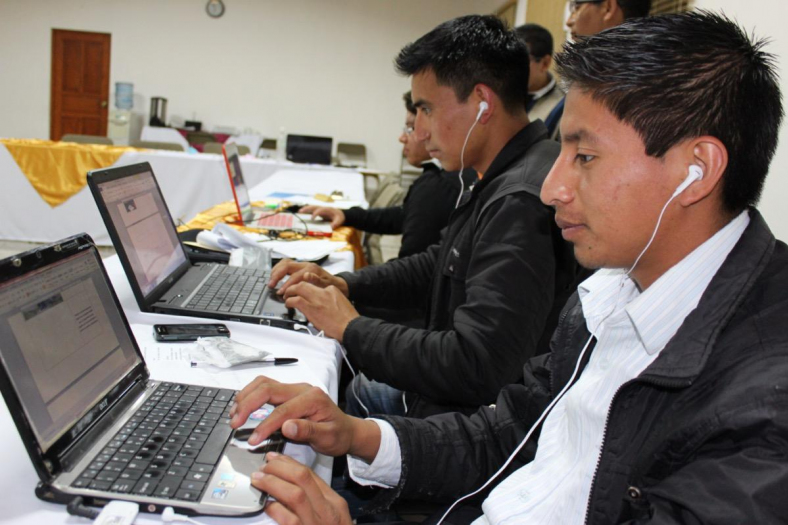 It is one thing to be concerned about being connected. Another matter of concern is the management of the data, once connected.

Who controls and manages the worldwide web? This is the main question of Tierra Común in Colombia. Tierra Común is a network of journalists, activists, human rights activists, and civil society organisations. They understand the importance of global connectivity and, at the same time, are concerned about the non-transparent data theft.

Tierra Común wants to help remote areas in Columbia have access to digital connection, if necessary, by expanding local networks if the internet is not available. In addition, Tierra Común is also part of an international movement for non-aligned technology, which was created to reduce the dependence of major leading players such as Google, Microsoft, Apple, Facebook, etc. This movement questions both the profit-based American model of Silicon Valley as well as the Chinese model of centralised control, and wants to decolonise the Internet data.

‘Not only our land and natural resources are being colonised, but all areas of our lives’, says Julio Gaitán, director of the ISUR Center (Internet and Society of the University of Rosario) in Bogotá.

Together with Comundos, Tierra Común will soon offer a course to the teachers of the indigenous Wayuu community, who live in the north-east of Columbia on the La Guajira peninsula. Thousands of fleeing Venezuelans enter Colombia through that remote region. Julio Gaitán explains through a WhatsApp to MO that ICT skills and digital storytelling can help connect Venezuelans and Colombians and draw attention to these issues.

But storytelling also helps to bring the Global South and Global North closer together. Storytelling helped Evergem gain new perspectives during corona. With the Municipal Council for International Cooperation (GRIS), the municipality supports the different Four Pillars initiatives (Vierde Pijler-initiatieven) in Africa and Latin America. These Four Pillars are private initiatives done by Belgian citizens who want to support a project in the Global South, which they discovered through personal contact.

When the pandemic cancelled numerous initiatives, ranging from world festivals to charity stalls, digital communication offered an opportunity for a new and more substantive approach. Comundos and the municipality set up a project to connect partners in the Global South with a constituency in Evergem through digital storytelling.

‘At first, people here showed some resistance’ says North-South official Koen De Baets. ‘Many are older than 65 and they are not comfortable in the digital world. But for them too, it was a particularly instructive experience in the field of technical skills.’

The project was wrapped up with a “film festival” during which about ten films were shown, and several “Oscars” were awarded. “The project was very intensive but very rewarding and instructive for all parties”, concludes De Baets.

The exchange between the Flemish community and the Global South is not limited to Evergem. In Sint-Niklaas, the twin city of Tabacounda in Senegal, they also used digital storytelling to shed light to the local issues in Tabacounda. The citizens of Tabacounda tell their fight against climate change:

In Merelbeke, which has a partnership with Toucountouna in Benin, they also discover how the installation of solar panels on buildings supplied energy and secured the courses in Toucountouna:

Sahi Boukari, head of the department of Land and Environment of Toucountouna, also tells his story about the support Merelbeke offered to the municipality of Toucountouna in raising awareness about hygiene and sanitary measures among the stallholders at the market: